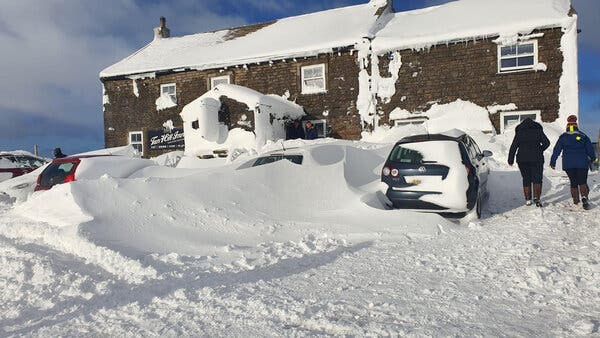 Up on a hill in Yorkshire, England, a crowd filled a pub on Friday to listen to an Oasis tribute band. Inside the pub, the Tan Hill Inn, the beers were cold, the fires were warming and the musicians were electric.

But outside, the winds were howling and the snow was swirling. The pub-goers knew the forecast was dire, but not so much that piles of snow as high as three feet would block the pub’s exits, said Nicola Townsend, the inn’s general manager.

After the tribute band, Noasis, finished its set, the local authorities said it was not safe to drive home, Ms. Townsend said on Sunday night.

So the patrons, the band members and seven inn employees stayed the night.

And on Sunday night, they were preparing to stay another.