Travel
Inside the Thai Temple Where Tattoos Come to Life
Oct 25, 2021 | The NY Times 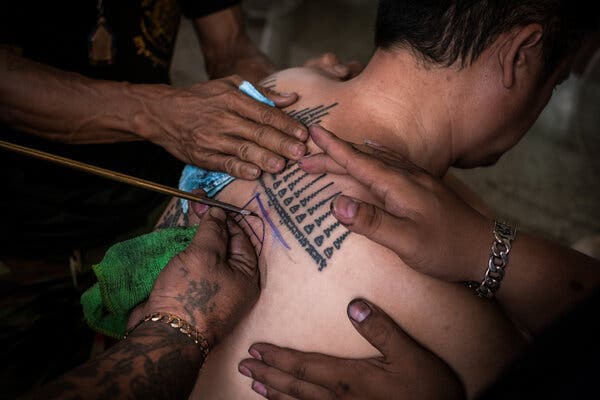 The sky was streaked with purple when I boarded the early-morning train from Bangkok to the Nakhon Chai Si District in central Thailand. For the entire hourlong ride, a monk sat quietly in front of me, smiling, gusts of wind swirling the orange robes over his tattoos.

We disembarked at the same stop, a small station surrounded by thick trees and rice paddies. I watched as he took a seat on the back of a motorcycle and sped off, followed closely by several other passengers. One of the last people left at the station, I asked the only remaining driver if he could take me to the Wat Bang Phra.

A few minutes later, the golden spires of the temple, glowing in the sunlight, came into view.

It was 2016, and, having just completed an assignment in Bangkok, I had a free day before departing for Cambodia.