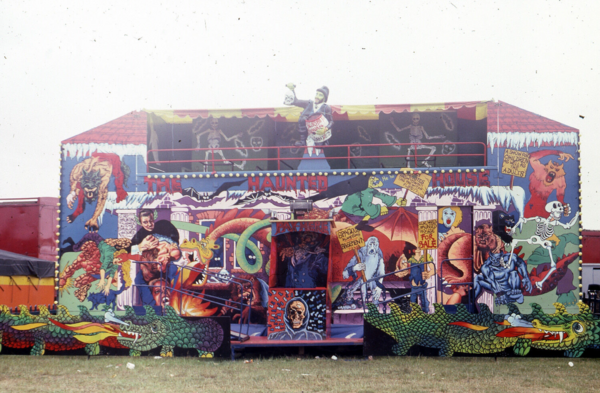 The photographs housed at the University of Sheffield’s National Fairground and Circus Archive aren’t really meant to be spooky, but there’s just something about a vintage snapshot of a vacant carnival ride or empty sideshow stage that feels like a peek onto a horror movie set.

That makes sense to collections manager Arantza Barrutia. She points out that, for many, fear is integral to the experience of a fair of any sort. The draw is “the thrill experience, the feeling of fear you get when you go on a ride or into a funhouse.” In the heyday of Britain’s fairgrounds, from the Victorian era and into the early 20th century, the country’s showmen were savvy businessmen, Barrutia says, who played with this idea of titillating audiences with fear. “Anything that entertained the public, the showmen would have been there, developing that idea,” she says. By the early 20th century, that often included the haunted house and the ghost train, in which fairgoers rode through dark tunnels inhabited by mechanized ghouls (commonly known in the amusement world as a “dark ride”). Barrutia speculates that widespread interest in spiritualism and communicating with those in the great beyond were responsible for these carnival mainstays.