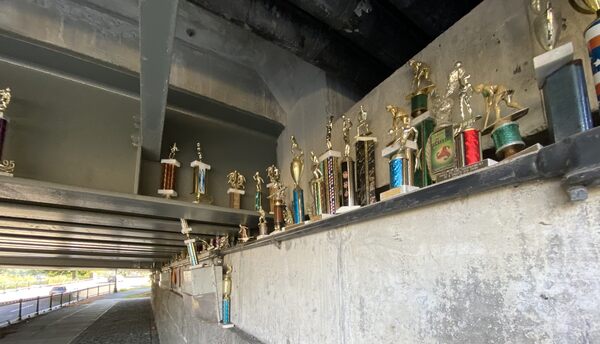 At the intersection of Memorial Drive and Massachusetts Avenue in Cambridge, is an organic art installation created by an anonymous local attorney.

The Trophy Room Project began in 2014 and consists of hundreds of trophies that line the steel support beams beneath Longfellow Bridge. Folks from around the world visit and contribute with their trophies which range from the mundane to the incredible.

Among the trophies are two items of philosophical note. The 2010 Herbert Schneider Award given out by the Society for the Advancement of American Philosophy to Professors Hilary and Ruth Anna Putnam line the wall. The Putnams are considered two of the most important American philosophers of the 20th-century.