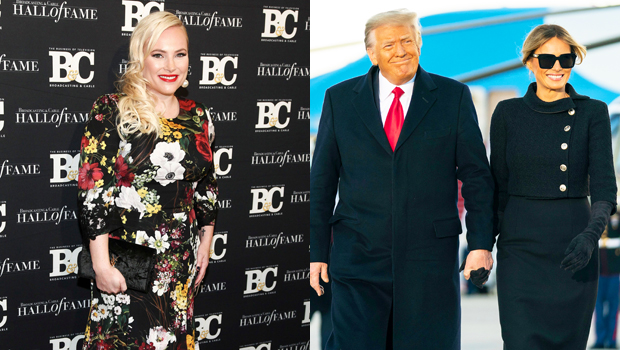 Talk about awkward! Meghan McCain, 36, dished all the details of her lone conversation with former President Donald Trumpand First Lady Melania Trump in a new interview with Watch What Happens Live on Wednesday October 20. Meghan laid out all the details of a phone call she got, after the then-president allegedly made fun of her father, late Senator John McCainand his famous thumbs down response to repealing the affordable care act. The former View co-host joked that fans would “get your money’s worth” out of her upcoming memoir Bad Republican, as she spills some “pretty good tea.”

Meghan revealed that she got the call from Trump, after tweeting out a news report that the then president had been “physically mocking” her father, as he was battling cancer. “He called, because there was a report in Axios by Mike Allen that he had been making fun of my dad’s injuries, because my dad—if you ever saw videos—he walked kind of funny, because he was tortured, and he did a thumbs down,” she told Andy Cohen. “It had been reported that he was making fun of him, and I tweeted, ‘What more must my family be put through right now.'”