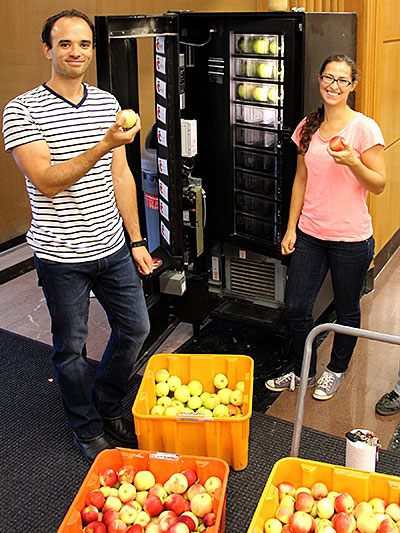 Each year, at Cornell University, fall heralds the return of a most unusual vending machine outside of Mann Library near the Department of Horticulture. In lieu of the usual assortment of snacks, the popular fixture features nine apple varieties, all grown at Cornell Orchards’ two locations.

For the modest price of a dollar, students can snag a crisp, juicy Gala, Shizuka, Honeycrisp, McIntosh, or Ginger Gold. Which apples are on display, though, varies month to month. In late August, the vending machine often showcases luscious Sansa or SweeTango apples, while November ushers in varieties like Goldrush. Graduate students in horticulture are responsible are responsible both for picking the fruit and keeping the machine fully stocked. All of the proceeds support the Society for Horticulture (SoHo).