Travel
The Ancient People Who Burned Their Culture to the Ground
Sep 23, 2021 | Atlas Obscura 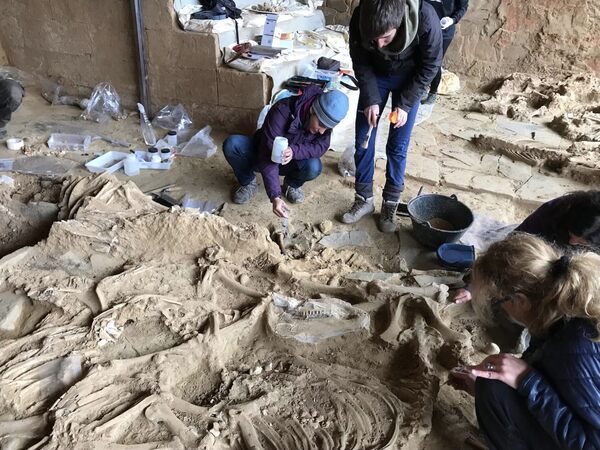 Smoke billows skyward, partially obscuring a monumental, two-story hall. The smell of roasting meat is thick in the night air, still oppressively hot though the sun has set on this arid valley in what is now southwestern Spain.

Inside the hall, hundreds of people gather around a long wooden table set with fine ceramics and bronze challices. They feast, and drink rivers of wine as the night deepens. A few feet outside the banquet hall, down a massive staircase, a fine-boned horse is led into an open courtyard. Perhaps observed by those who had been feasting, the animal’s throat is opened with a single slash. It is the first of dozens of sacrifices: other horses, cows, donkeys, pigs, a dog—and possibly humans—all brought to this place, ritually killed, and left as offerings to the gods. When the sacrifices end, the people remaining take up torches and set fire to the site, burning the bright red-painted plaster off its adobe pillars and charring the bodies of the sacrificed. As the last embers die out, they use shovels to bury the courtyard, the hall, everything. The work takes days, and will leave the site beneath a layer of dirt and clay nearly 14 feet thick in places. And then the people, the last known members of the Tartessos civilization, disappear from the world.